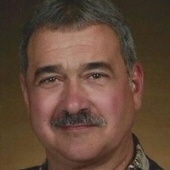 Gene Donald Bartelt, age 63, of Manawa, passed away on Sunday, April 9, 2017. He was born on June 11, 1953 in Freeport, Illinois, son of the late Donald and Elsie (Eurich) Bartelt. Gene served his country with the U.S. Army from 1972-1975. He was stationed in Alaska. Gene graduated from Neenah High School in 1971. He went to technical school in Oshkosh for one year. On May 1, 1987, he married Vicki (Steinbach) Suehs in Royalton. Gene worked as a welder assembler at Pierce Manufacturing from 1975 until he retired in 2013. Gene enjoyed fishing, hunting, photography, riding horses, camping, and walks with his dogs Bart, Z, Popper and Angel. Gene was very artistic and made a number of woodcarvings. He was a member of St. Paul Lutheran Church in Manawa.

He was preceded in death by his parents, grandparents; brothers: Jeff and Robert, a brother-in-law Rick Stockton; and mother-in-law Dantzi Steinbach.

The funeral service for Gene will be held on Thursday, April 13, 2017 at 11:00 a.m. at St. Paul Lutheran Church in Manawa with Rev. Nathan Reichle officiating. Burial will be in Union Cemetery, Symco. A visitation for Gene will be held at the church on Thursday from 9:00 a.m. until the time of the service. In lieu of flowers, please make a donation to the Manawa Ambulance, Humane Society and St. Paul Lutheran Church.

A special thanks to the Manawa Ambulance, Theda Star and Theda Care Hospital in Neenah.

To order memorial trees or send flowers to the family in memory of Gene D. Bartelt, please visit our flower store.