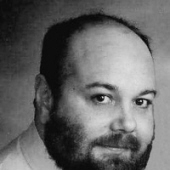 Garry L. Button, age 56 of Weyauwega died unexpectedly on Christmas Eve Day, December 24, 2016. Garry was born in Milwaukee, WI on September 29, 1960, son of Charles and Evelyn (Gohlke) Button. He graduated from Waupaca High School in 1978. On May 15, 1993, he married Marie Kurth at the Red Mill in Waupaca. Garry was currently employed at Value Added Bent Tubing in Neenah, where he had worked the last ten years.

Garry enjoyed hunting and fishing, which he always did with Marie. They enjoyed spontaneous road trips traveling the country side.

Following Garry’s wishes, there will be no visitation or public funeral.

Family and friends are welcome to visit the family at the home or send condolences to E7224 Kurth Drive, Weyauwega, WI 54983.

Garry, you were the love of my life. You gave me my youth back. We loved to hunt and fish and enjoyed life to the fullest. I will always love you. Marie.

To order memorial trees or send flowers to the family in memory of Garry L. Button, please visit our flower store.