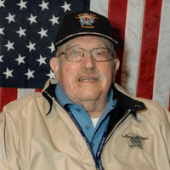 Fredric A. Raether, age 84 of Weyauwega, peacefully went to the Lord to his new home on Friday, April 3, 2020 at Crossroads Care Center in Weyauwega. He was born on February 22, 1936 in Augusta, Wisconsin, son of the late Paul and Gladys (Quast) Raether. On March 23, 1991, he was united in marriage to Karen Spaulding at St. John’s Lutheran Church in Baldwin’s Mill. Fred spent his childhood on the family farm. After graduating from Augusta High School, he proudly served his country with the U.S. Marine Corp. during the Korean War. He then attended UW-Eau Claire and received his Bachelor of Science degree in Education. He came to Weyauwega in 1963 and spent 39 years teaching at Weyauwega-Fremont High School. He spent most of his free time coaching baseball and running the clock for all sporting events and continued doing this during his retirement. He always said “the students never changed, it was the world around them.” After his retirement, you could usually find him with the things he loved the most, his animals. His home was the drop-off center for any homeless animal. A big highlight of Fred’s life was taking the Honor Flight to Washington D.C. in 2017. He was a member of Trinity Lutheran Church in Waupaca.

He was preceded in death by his parents and a sister, Mona Niemuth.

Due to the state-mandated restriction of large social gatherings, a private family Christian funeral will be held at Trinity Lutheran Church in Waupaca with Rev. Andy Behrendt officiating. Military honors will be held immediately following the service.

To order memorial trees or send flowers to the family in memory of Fredric A. Raether, please visit our flower store.