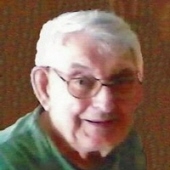 Frederick K. Wohlrabe, age 89, of Ogdensburg, passed away on Thursday, April 13, 2017 at Theda Care Hospital in Appleton. He was born on October 23, 1927 in Fremont, son of the late Herbert and Elcie Wohlrabe. Fred married Emily Fox and she preceded him in death in 2012. Fred worked for Northwestern Railroad in Pekin, Illinois for 30 years until his retirement. Fred and Emily enjoyed watching the turkeys and deer on his land, and also feeding the squirrels.

He is survived by his siblings: Orville Wohlrabe and Margaret Wege. He is further survived his wife Emily's family, nieces, nephews, other relatives and friends.

Besides his parents and wife, he was preceded in death by two brothers: Raymond and Everette; and a sister Evelyn Greer.

To order memorial trees or send flowers to the family in memory of Frederick K. Wohlrabe, please visit our flower store.