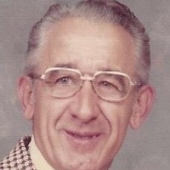 Frederick "Fritz" Guenther, age 90, of Manawa, went to his heavenly home on Tuesday, April 7, 2015, at the Manawa Community Nursing Center. He was born on June 4, 1924, in the Town of Royalton, son of the late Christoph and Ida (Papke) Guenther. Fred was a resident of Waupaca County his entire life. He graduated from Little Wolf High School in 1942. He was a veteran of World War II, having served with Headquarters Co. 112th Regiment, 28th Division, European Theatre from 1944-1946. On October 19, 1946, he married Julia Much. She preceded him in death on April 8, 1980. Fritz worked as a cheesemaker for Manawa Creamery, also Side Hill View Cheese Factory in Big Falls for 16 years. He then worked at Borden's in New London for 28 years as a production supervisor. In 1975, he moved to Manawa. Fritz was a member of St. Paul Lutheran Church in Manawa. He is survived by his daughter: Kathy (Bob) Pirk; 6 grandchildren: Gary, Paul (Tori), and Lisa Pirk; Christopher, Michael and Amy Guenther; 7 great-grandchildren: Natasha, Lexi and Maleah Pirk; Damian, Jakob, Emma and Ayden Guenther; daughter-in-law: Joan Guenther; brother-in-law and sister-in-law: Norman (Caroline) Much. He is further survived by cousins, other relatives and friends. Besides his parents and wife, he was preceded in death by a son Larry on November 5, 2011. The funeral service for Fritz will be held on Friday, April 10, 2015, at 11:30a.m. at St. Paul Lutheran Church in Manawa with Rev. Vilas Mazemke officiating. Burial will be in Little Wolf Cemetery in the Town of Little Wolf. A visitation for Fritz will be held directly at the church on Friday from 9:30 a.m. until the time of the service. The family would like to extend a special thank you to the Manawa Community Nursing Center for their care and concern of Fritz.

To order memorial trees or send flowers to the family in memory of Frederick 'Fritz' Guenther, please visit our flower store.