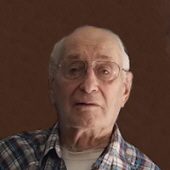 Francis “Fritz” Harold Douglas, of Weyauwega, went to his heavenly home on October 16, 2019 at the age of 95 years old. After a short battle of failing health, he passed peaceful at ThedaCare Medical Center in New London with family by his side. Fritz was born December 13, 1923 in Dale, WI to Harold and Lucille (McDermott) Douglas. As a boy Fritz learned the value of hard work and helping others while growing up on his family’s farm. He was drafted into the United State Marine Corp. in WWII and fought bravely for our country in the South Pacific. He returned home after serving his country he met the love of his life Joyce Marcy. The two of them were joined in marriage on October 19, 1946. They had two children together-Thomas and William. Joyce went to her heavenly home on July 4, 1983. Fritz worked many jobs throughout his life, but his 27 years working for the county were his favorite. After he retired he enjoyed driving around the country to see what was new. He worked in Weyauwega at the Cenex station for a number of years, helping out in the store, but more socializing with customers. He was always willing to help out anyone that needed his help. He especially enjoyed cutting down trees for people and making wood. He cut his last tree down at 89 years young and finally said that was enough. He enjoyed driving friends and neighbors to their appointments. He loved spending time with his family any chance that he got. He enjoyed going out to eat. Pine Tree and Romy’s were his favorites. Fritz was a member of Royalton Christian Church. Fritz loved life to the fullest and touched the hearts of so many people. He will truly be missed!

The funeral service for Fritz will be held at 11:00 a.m. on Wednesday, October 23, 2019 at Royalton Christian Church with Rev. Tom Theama officiating. Visitation for Fritz will be held on Tuesday, October 22, 2019 from 4-7 p.m. at Cline Hanson Dahlke Funeral Home in Weyauwega and also at the church on Wednesday from 9:30 a.m. until 10:45 a.m. Burial will be in Royalton Cemetery.