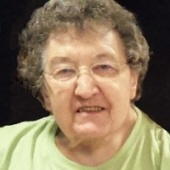 Frances Marie Knack , age 87, of King, formerly of Weyauwega, passed away on Tuesday, June 4, 2019. She was born on October 28, 1931, in Bear Creek, daughter of the late Louis and Lavina (Young) Lorge. On June 14, 1959, she was united in marriage to Otto C. Knack. He preceded her in death in 2005. Frances was a waitress for many years at various restaurants in Waupaca County. She was a resident of the Wisconsin Veteran's Home in King since 2004.

Besides her parents and husband, she was preceded in death by her five siblings.

Cline-Hanson-Dahlke -Weyauwega
To order memorial trees or send flowers to the family in memory of Frances M. Knack, please visit our flower store.