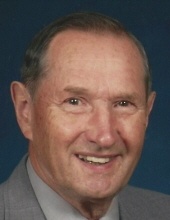 Floyd Leo Roloff, age 92, Town of Royalton, passed away peacefully on Friday, May 6th, 2022 at his home. He was born in the Town of Royalton on April 3rd, 1930, son of the late Leo and Julia (Baumgart) Roloff.

Floyd attended grade school in Royalton, and graduated from Little Wolf High School in Manawa in 1948, along with his future wife, Dolores Miller. Floyd joined the U.S. Army in 1948. On January 13th 1951, Floyd and Dolores were united in marriage at Zion Lutheran Church in Manawa. While in the service, he served in Germany and was Honorably Discharged in December of 1951. Floyd worked for 42 years at Simmons Juvenile Products in New London, with the last 27 years as a supervisor in the crib assembly department. He was a Town of Royalton volunteer fireman for 22 years and President of the Royalton Cemetery Association for many years. Floyd enjoyed bowling, hunting, and fishing. He and his family spent many years at their trailer near Wittenberg where they enjoyed trout fishing. Floyd and Dolores especially loved going to the Hodag Country Music Festival in Rhinelander where they made many friends from all over the world, including Australia.

The funeral service for Floyd will be held on Thursday, May 12th, 2022 at 11:00am at Zion Lutheran Church in Manawa with Rev. Greg Douthwaite officiating. Burial will be in Royalton Cemetery, Town of Royalton. A visitation for Floyd will be held at the Cline-Hanson-Dahlke Life Celebration Center in Manawa on Wednesday, May 11th, 2022 from 4:00-7:00pm, and also on Thursday at the church from 10:00am until 10:45am.
To order memorial trees or send flowers to the family in memory of Floyd Leo Roloff, please visit our flower store.