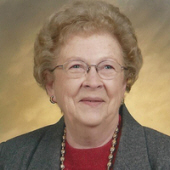 Evelyn L. Klotzbuecher, Manawa, age 95, entered eternal life on Friday, June 26, 2020. Her proudest titles in life were wife, mother, grandmother and great-grandmother, which she embodied through her unwavering love that she gave them. Evelyn was born on July 17, 1924, in Manawa, daughter of the late Martha and Otto Fuhs. On October 6, 1945, she married Howard Klotzbuecher. They farmed their entire life, until retiring and moving into their new home on April 27, 1985. Howard died on March 28, 1986. Evelyn remained in their home until moving into Manawa’s Senior Village in 2006. On March 9, 2020, she moved into Bethany Home, where she resided until the time of her death. Evelyn was a member of St. Paul Lutheran Church and a long-time member of their ladies aide.

Private family services will be held for Evelyn and burial will be in Little Wolf Cemetery, Manawa.

It broke our hearts to lose you, but you did not go alone. For a part of us went with you on the day God called you home.

To order memorial trees or send flowers to the family in memory of Evelyn L. Klotzbuecher, please visit our flower store.