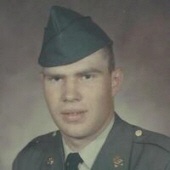 Eugene E. “Huey” Montgomery, age 72 of Weyauwega, passed away on Saturday, September 26, 2020. Huey was born on August 4, 1948 in Waupaca, son of Richard and Ruth (Spiegelberg) Montgomery. Huey was an outstanding athlete. In 1967 he got a tryout with the St. Louis Cardinals in St. Petersburg, Florida. He enlisted in the US Army in May, 1968 and spent 18 months in Vietnam as an Army Medic. Huey was wounded in August, 1969 and was a Purple Heart recipient. After his discharge, he got into construction and finished concrete until his retirement. During that time, he and his brother Jack worked in Minnesota, South Dakota, Iowa and Orlando, Florida. Huey worked for Don Braun for most of the rest of his career. Huey was a life-long member of the VFW Post 10407 and also a member of the American Legion Post 176, both in Weyauwega.

Huey is survived by his mother, Ruth; sister, Barbara (John) Butkus; and brother, Jack (Diana) Montgomery. He is further survived by his nephew Johnny and nieces: Lori, Cheryl and Tracy. He was preceded in death by his father, Richard.

A graveside service with Military Honors will be held at the Oakwood Cemetery in Weyauwega on Friday, October 2, at 2:00 pm. A special thanks to the staff at Heartland Health in Manitowoc for their care and concern for Huey.

Oakwood Cemetery
To order memorial trees or send flowers to the family in memory of Eugene 'Huey' Montgomery, please visit our flower store.