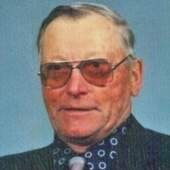 Elmer E. Prill, age 90, of Grand Chute, formerly of Symco, was called home on Monday, October 5, 2015. Elmer was born on May 11, 1925 in the Town of Union, to the late Ludwig and Esther (Jahsman) Prill. He married Velda M. (Gluth) on June 16, 1956, at St. Martins Lutheran Church in Clintonville. She preceded him in death on March 27, 1982. Elmer farmed in the Town of Union all his life. He was a lifelong member of St. Mark Lutheran Church in Symco, where he served on various boards. Elmer cherished faith, family and the fond neighborhood. He was known for being a handyman, fixing just about anything. He was a volunteer firefighter for the Town of Union for many years. In his spare time, Elmer loved to go fishing. Elmer is survived by 1 son, Dennis Prill (special friend Carol Wohlrabe) and his daughter, Connie Prill (special friend Delwin Grimm); 2 daughters, Charlotte Thomack (special friend Ken Jacobchick) and her children, Nikki (Andy) Voss, Alicia (Scott) Korth and Melissa Thomack (special friend John LaViolette) and Audrey (Paul) Partika; 5 great grandchildren, Clara, Cora, Linken, Deklen and Orren; brother, Dave (Vivian) Prill; sister, Cora Kahl, sister-in-law, Alice Prill and and many other nieces, nephews, relatives and friends. Elmer is preceded in death by his parents and wife; brother, Dean Prill, brothers-in-law Ralph Kahl, Paul (Marie) Gluth and Herman (Livia) Gluth. Funeral services for Elmer will be held at 11:00 a.m. at St. Marks Lutheran Church, Symco, on Friday, Oct. 9, 2015 with the Rev. Jeffery Smiles officiating. Visitation will be at Cline Hanson Dahlke Funeral Home, Manawa on Thursday, Oct. 8, 2015 from 4-7 p.m. and again on Friday, Oct. 9 directly at the church from 10:00 a.m. until the time of service. Burial will be in Union Cemetery, Town of Union.

To order memorial trees or send flowers to the family in memory of Elmer E. Prill, please visit our flower store.