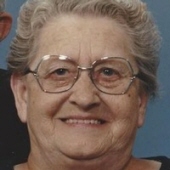 Age 84, of Weyauwega, went to her heavenly home on Thursday, April 28, 2016 at Theda Care Hospital of Waupaca surrounded by her loving family. She passed away the same day as her loving husband did 13 years ago. Lizzie was a resident of Crossroads Care Center in Weyauwega over 2 years. She was born on September 16, 1931 in the Township of Blaine, WI, daughter of the late Anton and Emaline (Davis) Anderson. On June 17, 1950, Lizzie was united in marriage to Earnway Schwirtz. They settled in Fremont and Weyauwega and raised their family. They farmed for many years, along with driving school bus for 18 years with the Weyauwega-Fremont School District. Lizzie enjoyed riding motorcycles, gardening, her monthly visits with her Pastor Mark, playing cards (her favorite card game was garbage), bingo and especially her grandchildren and great-grandchildren. She will be remembered for her kind and loving heart and unique sense of humor.

Besides her parents, she was preceded in death by her husband; granddaughter, Cora Jones; four brothers, Gordon, Leslie, Marinus and Kenneth.

The funeral service for Elizabeth will be held on Monday, May 2, 2016, at 10:00 a.m. at Immanuel Lutheran Church in Zittau, (9077 North Road, Fremont), with Rev. Mark Kinney officiating. Burial will be in Lakeside Cemetery in Fremont. A visitation for Elizabeth will be held on Sunday, May 1, 2016, from 1-4 p.m. at the Cline-Hanson-Dahlke Funeral Home in Weyauwega and on Monday at the church from 9:00 a.m. until the time of the service.

To order memorial trees or send flowers to the family in memory of Elizabeth Rachel Schwirtz, please visit our flower store.