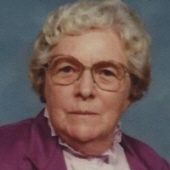 She was born Eleanor Olivia Johnson in Prairie Lake Township, near Wright, MN, the daughter of Anton Johnson and Olianna Ramstad Johnson, both Norwegian immigrants. She attended Cromwell, MN High School graduating in 1936. It was there that she met her husband Irl Woodrow Poehlman when he was teaching Agriculture. They were married on June 18, 1938 and moved to rural New London in 1943, where Eleanor was a stay at home mother and helpmate on the farm during their first 30 years of marriage. Following her nine children’s entry into school, Eleanor worked as a bookkeeper for Dairyland Animal Health Veterinary Clinic in Manawa and Weyauwega for 15 years. After retiring, she joined Irl doing gardening, and they were weekly produce vendors at the Green Bay Farmer’s Market for over 20 years.

Eleanor was a lifelong member of the Royalton Christian Church, serving as Clerk and Treasurer of the church and President of the Ladies Aid. Additionally, she was an active 4-H leader in Waupaca County for over 25 years, she participated in the Homemaker’s Program serving as Secretary of the County Homemaker’s Council, and was an avid Sheep’s Head player, traveling throughout Waupaca county to play at various card parties.

The family wishes to thank the Manawa Community Living Center staff for the compassionate care she received in her final years.

To order memorial trees or send flowers to the family in memory of Eleanor O. Poehlman, please visit our flower store.