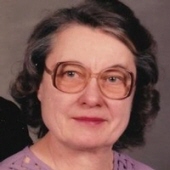 Elaine G. Ferg, age 84, of Manawa, went to her heavenly home on Wednesday, May 13, 2015, at Appleton Medical Center. She was born on February 7, 1931, in the Town of Lebanon, daughter of the late George and Arella (Randt) Gresen. On November 26, 1953 she was united in marriage to Donald L. Ferg. He preceded her in death in 1999. Elaine worked at A. Sturm & Sons in the office for many years. She later worked for the Manawa School District. Elaine also worked alongside Don on the family farm. She was a member of St. Paul Lutheran Church in Manawa. She is survived by her children: Mark (Barbara) Ferg, Manawa; Lynn (Christopher) Kraus, Menomonee Falls; grandchildren: Andria (Kevin) Link, Ashley and Christopher Ferg; Matthew, Zachary, Nicholas and Nathaniel Kraus; also great-grandchildren Jocelyn and Kaydence Stocker. She is further survived by nieces, nephews, other relatives and friends. Besides her parents and husband, she was preceded in death by a sister Norma Gresen, a brother Eugene (Joyce) Gresen, and sister-in-law Marion (Frank) Asman. The funeral service for Elaine will be held on Monday, May 18, 2015, at 11:30 a.m. at St. Paul Lutheran Church in Manawa with Rev. Vilas Mazemke officiating. Burial will be in Union Cemetery in Symco. A visitation for Elaine will be held directly at the church on Monday from 9:30 until time of the service.

To order memorial trees or send flowers to the family in memory of Elaine G. Ferg, please visit our flower store.