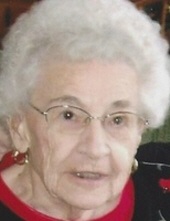 Eileen Elizabeth (Kriese) Wall, of Weyauwega, age 97, was taken home to heaven on Wednesday, December 23, 2020, a day she had anxiously awaited. Eileen was born on June 1, 1923 and became a child of the Lord through her baptism on July 1, 1923. She was the sixth of nine children born to Walter and Emma (Thiel) Kriese and grew up in the Little River area, south of Weyauwega. She was a life-long resident of Weyauwega and member of St. Peter Ev. Lutheran Church where she was confirmed on April 5, 1936. Eileen graduated from Weyauwega High School in the spring of 1940 at the age of 16. After high school she worked at Vey’s Fairway Grocery Store in Weyauwega until she turned 18 and attended Oshkosh Business College. She was employed by Kimberly-Clark, Neenah from 1942 until the time of her marriage to Kieth L. Wall on January 25, 1948. Over the course of her marriage, Eileen was employed at Domke’s Dime Store, Vey’s Fairway Grocery Store and Presto Products, all in Weyauwega. She and Kieth together built three homes in the Town of Weyauwega, doing a good share of the labor and finishing work themselves. Eileen thoroughly enjoyed working in her flower gardens and growing various fruits and vegetables over the years, as well as snowmobiling, sewing and crocheting.

The Christian Funeral for Eileen will be held at 11:00 a.m. on Tuesday, December 29, 2020 at St. Peter Ev. Lutheran Church, Weyauwega, with Rev. Fred Toppe officiating. A visitation will be held at the church on Tuesday from 9:30 a.m. until the time of the service. Burial will be in Oakwood Cemetery in Weyauwega. For those unable to attend, Eileen’s service will be recorded and a link placed on her obituary page on our website at www.clinehansondahlkefuneralhomes.com. The family would like to extend a sincere thank you to Trinity Terrace and St. Joseph Residence for their loving care of Eileen the past three years. In lieu of flowers, a memorial is being established to benefit St. Peter Ev. Lutheran Church.