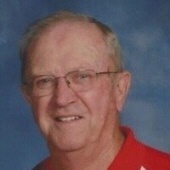 ED'S PICTURE DVD TRIBUTE IS IN VIDEO ABOVE

ED'S FUNERAL MASS IS IN THE VIDEO ABOVE

Edward “Ed” J. Plachetka, age 80 of Weyauwega, passed away on Tuesday, April 28, 2020, after a long and courageous battle with cancer. He was born in Hillsboro, WI on November 29, 1939, to Joseph and Christina (Mislivecek) Plachetka. He graduated from Reedsburg High School in 1957. After high school, Ed joined the Army Reserves and was activated for a year during the Berlin crisis. He worked as an Electrician/Project Engineer for Wisconsin Dairies in Reedsburg from 1973-1986, before moving to Weyauwega where he was employed at Weyauwega Milk Products (Trega Foods, Agropur) until his retirement in 2011. On July 3, 1965, he married his wife Carol (Zimmerman) Plachetka. This July they would have celebrated 55 years of marriage. Together they have four children. Ed enjoyed attending his children and grandchildren’s sporting events. He also enjoyed hunting, golfing, cheering for the Badgers, Brewers, and Packers and spending his winters in the warm Florida weather.

He was preceded in death by his parents Joseph and Christina; brother Francis; brother-in-law Ronald Gawronski and mother and father-in-law William and Ella Zimmerman.

Due to the state mandate against large gatherings a private Funeral Mass will be held for Ed at Ss. Peter & Paul Catholic Church in Weyauwega with Rev. Matthew Rappl officiating. Burial will be in Oakwood Cemetery, Weyauwega. There will be a gathering of family and friends to celebrate Ed's life in the future.

To order memorial trees or send flowers to the family in memory of Edward Plachetka, please visit our flower store.