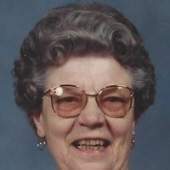 Edna A. Wolter, age 98, of Manawa, went to her heavenly home, on Thursday, June 2, 2016 at the Manawa Community Care Center. She was born on November 11, 1917, on the family farm, in the Town of Union, Waupaca County, the only child of the late William and Hulda (Zantow) Marquardt. She grew up on the family farm, and lived most of her life in the Town of Union. She worked as a dietary aide in nursing homes, including eight years in Wausau where she met Milton E. “Bud” Wolter. They were married on May 29, 1971. They continued to live and work in Wausau, until they retired in 1978, at that time they moved back to the Town of Union. Edna enjoyed nature and loved the outdoors, feeding the birds and wildlife. She also loved to read, especially books about nature and people. She was a member of the Manawa United Methodist Church, where she was very active and held a number of official positions. She also did much volunteer work, including several summers at the Butterfly House at Mosquito Hill Nature Center in New London.

She is survived by her Goddaughters: Marlene (Phil) Aggen, Melissa (Joshua) Viste, and Alaina. She is further survived by other relatives and also Julia (Carson) White and their daughter Joanna; special friends Todd (Bonnie) Olsen.

The funeral service for Edna will be held on Monday, June 6, 2016, at 11:00 a.m. at the Manawa United Methodist Church with Rev. Steven Rice officiating. Burial will be in Union Cemetery in Symco. A visitation for Edna will be held directly at the church on Monday from 9:30 a.m. until the time of the service.

To order memorial trees or send flowers to the family in memory of Edna A. Wolter, please visit our flower store.