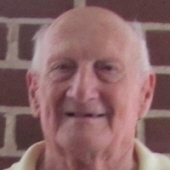 Duwayne Keith Redmann went home to be with the Lord Jesus on Wednesday, March 29th, 2017. Duwayne was the son of Herbert and Frieda (Rosenau) Redmann, born in Oshkosh on August 4, 1928. He was baptized and confirmed in the Wisconsin Evangelical Lutheran Synod, and was a lifelong member of St. Peter Lutheran Church in Weyauwega. On November 14, 1948, he married Mary Kadolph of Weyauwega. “D.K.” served in the United States Marine Corps from his high school graduation in 1946 through 1956 as a navigator and intelligence collector. His duty included several years in China and the Pacific. After leaving the military, he was a faithful employee to many local businesses, as well as a treasured friend, son, brother, husband, father, grandfather, and great grandfather in the years that followed. His favorite past-times included reading, writing about his experiences, and researching genealogy and military history. He enjoyed many hours with friends in the History Club and taking classes at the Tempe Public Library. Welcoming him into his eternal reward are his parents, his father and mother-in-law, John and Edna Kadolph, sisters, Joan Behm and Helen Boelter, brother Paul, son-in-law Ralph Koch, grandson Scotty Koch, brothers and sisters-in-law, nieces and nephews, and many friends. Looking forward to a blessed reunion in heaven are his wife, Mary and son Matthew (both of Mesa, Arizona), daughters Catherine Koch (Gilbert) McKenzie of Menasha, and Kerry (Michael) Franks of Independence, grandsons Jason (Teresa) Koch of South Lyon, MI, Paul Koch of Hartland, and Zachary Franks of Ajo, AZ, granddaughters Rebecca (Ken) Ambrosini of New London, Elizabeth (Craig) Barnhill of Grafenwohr, Germany, and Kathryn Franks of Eau Claire, and great-grandchildren Breanna, Hailey, Madalyn Udics, and Ella Koch, Vincent Ambrosini, Owen and Siena Koch, Gracie Franks, and Calvin, Joel, and Vivian Barnhill, brother and sister-in-law Gordon (Bud) and Sharon Kadolph, Cardelle Redmann, nieces and nephews. The Christian Funeral for Duwayne will be held on Monday, April 3, 2017 at 11:30 a.m. at St. Peter Ev. Lutheran Church in Weyauwega with Rev. Dennis Lemke and Rev. Newlin Schafer officiating. Burial will be in Oakwood Cemetery, Weyauwega. A visitation for Duwayne will be held at the church on Monday from 10:00 a.m. until the time of the service. We want to extend a very special thank you, to Reverends Martin Spaude, and Dennis Lemke for their friendship and pastoral care over the years, and the wonderful ladies of Crossroads and Bridges for their tender concern and care during the past two years. “He who lives and believes in Me will never die.”

To order memorial trees or send flowers to the family in memory of Duwayne K. Redmann, please visit our flower store.