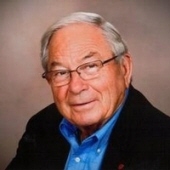 DuWayne “Dewey” R. Carl was called to his heavenly home and entered eternal rest on Tuesday, August 16, 2016. He was born May 9, 1934 in Neillsville, WI, the son of Irvin and Ida Carl. He graduated Greenwood High School with honors in 1952 and received an athletic scholarship to attend UW Madison where he earned a BS Degree and lettered in varsity football and track. From 1953-1955 he served in the Army Corps of Engineers and was an aid to the Commanding Officer. In 1959 he graduated UW Eau Claire with a BS Degree in Education and he went on to serve as an assistant basketball coach and substitute teacher at Eau Claire Memorial and in the Berlin school district. In 1962 he began an eleven-year career with the Neenah Joint School district, teaching social studies and eventually using his MA degree in Pupil Personnel and Administration by serving as a Guidance Counselor and Assistant Principal for Neenah High School. A highlight of his time in Neenah was serving as Assistant Head Coach and Offensive Coordinator of the 1966 football team as they went on to become the State Football Champions.

Following the death of his father-in- law, in 1973 Dewey joined A. Sturm & Sons, Inc. in Manawa, Wisconsin where he held positions as Plant Supervisor, Personnel Director, Director of Operations and Vice President of the Board of Directors. He retired from the company in 1999.

Dewey was committed to being an active member of his community. He served and worked with many organizations: Alderman for the city of Manawa for twelve years, Council Member at St. Paul’s Lutheran Church, Northern Lakes Winnebago Private Industry Council Advisory Board of the W-2 program of Waupaca County, Fox Valley Workforce Development Board, Waupaca County Industries Advisory Board, Waupaca County Crime Stoppers Committee, Riverside Hospital Foundation Board, New London Family Medical Foundation Board, Manawa School District Development Board, and The Little Wolf Trail Organization. In 2011 Dewey was honored and humbled to receive the Outstanding Philanthropist Award from the Association of Fundraising Professionals of Northeast Wisconsin.

In 1974 Dewey joined the Manawa Lions Club and from that time until his death, he dedicated his time, talents and resources to the Lions organization, including participating in medical mission trips to Guatemala, Mexico and Nicaragua. He held numerous positions at the club, district, state and international levels, including Wisconsin Lions Foundation President 1986-87 and District Governor 1990-91. Dewey was the President and CEO of Lions Pride Endowment Fund of Wisconsin, Inc., serving as chairperson and devoting countless hours to promoting the organization in its endeavors to help others. He was especially active at the Wisconsin Lions Camp in Rosholt, providing summer camping opportunities to children and adults with disabilities. He was awarded an International Presidential award in 1983, the Wisconsin Lions Foundation Presidential Award in 1988, the Knight of Sight, and a Ray Hempel Fellowship. He is also a Melvin Jones Fellow and a Birch Sturm Fellow.

A long standing family history connected Dewey to St. John’s Northwestern Military Academy in Delafield, Wisconsin as his two sons, son-in-law and wife’s cousin were graduates. Over the years Dewey built a close relationship with the school, attending numerous events and supporting the Academy’s visions to encourage and promote excellence in young men.

After retiring from his working career, Dewey and Bev spent their winters in Naples, Florida and also enjoyed many years vacationing in Aruba and traveling abroad. For the past 25 years, Dewey participated in the Badger Desert Classic Golf Outing in Las Vegas with his sons Randy and David. Every 4th of July weekend you could find Dewey taking tickets at the Manawa Rodeo and in November “Dewey’s Woods” came alive with Deer Camp activities shared with friends and family. An avid Green Bay Packer and Wisconsin Badgers fan, Dewey thoroughly enjoyed attending football games during his lifetime, as well as golfing, snowmobiling, numerous hunting and fishing trips, and his daily walk. The “Birthday Group” celebrations, going out to dinner and socializing with friends, was something he always looked forward to.

Dewey’s faith in God was ever-present as he often expressed the importance of faith to family and friends, and always included a message of his personal faith in his annual Christmas letter. He was a member of St. Paul’s Lutheran Church in Manawa and also attended Shepherd of the Glades Lutheran Church in Naples, Florida.

Dewey married Beverly Sturm on March 22, 1964. Together they raised three children and went on to enjoy participating in the lives of their three grandchildren. Most recently Dewey became a great- grandfather. He is survived by his children: Randy and his lifetime partner Lilly, Scottsdale, AZ; Mary Mann and her husband John, Elcho, WI/Winston-Salem, NC; David and his wife Judy, Waukesha, WI; Granddaughters Carmine Mann and her wife Jen Oas, Winston-Salem, NC; Kristina Toppins and her husband Ryan, Appleton, WI; Grandson Danny Carl, Waukesha; Great-Granddaughters Audrey and Iris Mann;

Brother Harland Carl and his friend Karen Hermanson, Sister Marjorie Fahim, Goddaughter Melanie Hoefer, Godson Francis “Butch” Carl and numerous nieces and nephews. He is further survived by a very special friend, Lucy Keuntjes with whom he has enjoyed loving companionship for the past eight years. Dewey was preceded in death by his parents, his brother Robert Carl, his wife Beverly, and his great-granddaughter Angelica Mann.

Dewey’s family will be forever grateful for the outpouring of love and concern expressed to Dewey during the past two months by friends, caregivers and hospice.

A memorial fund has been established to the Lions Pride Endowment Fund of Wisconsin.

To order memorial trees or send flowers to the family in memory of DuWayne 'Dewey' Carl, please visit our flower store.