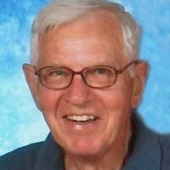 We celebrate the life of Dewey, born 11-5-1934 to Henry and Hildegard Schultz. He passed away peacefully April 23, 2016. Dewey lived his early life on a farm near Ogdensburg with his sister Janet. He attended grade school at Maple Grove, except for one year at Gallilee School. Dewey graduated from Waupaca High School in 1952. During his high school years he worked for Sturm & Sons in Manawa. After graduation he worked at Churney Cheese. He married Mary Van Epps at First Presbyterian Church in Weyauwega on September 3, 1955. He served in the US Army as a medic from December 1955 to December 1957, continuing in the Army Reserves for several years. In 1957, he began working at Farmers and Merchants Bank in Weyauwega as a bookkeeper, assisting with maintenance. He became a teller, loan officer and eventually the President of Farmer’s Merchants Bank. F & M became Valley Bank, then M & I and is now BMO. Dewey graduated from School of Banking in Madison. He retired from the bank in 1992 and went to work for Hutchison Insurance, Weyauwega. Dewey was involved in First Presbyterian over the years on most committees and offices, Lions Club, Industrial Development Corporation, alderman, New London Hospital Board, Committee for School Improvement, Chamber of Commerce in Weyauwega and Weymont Food pantry. Dewey delighted in giving a helping hand to anyone needing assistance. Dewey was an avid hunter, enjoying many years deer hunting on the Ogdensburg farm with family and friends. Much firewood was also cut, hauled, split and stacked on the farm using his dad’s trusty 8-N Ford tractor. Annual trips to South Dakota with friends, provided adventure and pleasure, as did goose hunting on Horicon Marsh and duck hunting on the Wolf River. Raft fishing on the Wolf River took precedence in the spring, also trout fishing on Bass Lake. There were many great times fishing for lake trout on Lake Michigan and Green Lake. He had a passion for bowling for many years with the camaraderie of his teammates. His only complaint being when there was too much oil in the lanes! In his early years he also played fast pitch softball. He was a Green Bay Packers and Los Angeles Dodgers fan. He had a special love for his adored springer spaniels and his kitties. His actions reflected his spirit of working hard and giving back. Dewey embraced setting up the church dining area for pancake suppers, running the Easter breakfast, putting up the church Christmas trees (including climbing ladders to string lights). He surprised his boys (and wife) with a mini bike. Dewey was a tireless tree planter and hamburger fryer at gatherings. He was a weekend newspaper deliveryman with his kids. He believed the world should be fair for everyone.

Dewey was preceded in death by his parents; a sister and brother-in-law, Janet and Dick Peterson.

A memorial service for Dewey will be held at 11:00 a.m. on Friday, April 29, 2016 at First Presbyterian Church in Weyauwega. A gathering of family and friends will take place at Cline-Hanson-Dahlke Funeral home in Weyauwega on Thursday, April 28, 2016 from 4-7 p.m. and also from 9:30 until the time of service Friday at the church.

The family asks that memorials be directed to First Presbyterian Church, Lions Pride (to benefit Lions Camp) or the charity of their choice.

The family wishes to acknowledge the special and tender care given to Dewey by the staff at Lakeview Manor and ThedaCare Hospice. We also wish to thank the many friends for their kindness and support of Dewey and Mary during Dewey’s illness.

To order memorial trees or send flowers to the family in memory of Duane 'Dewey' Schultz, please visit our flower store.