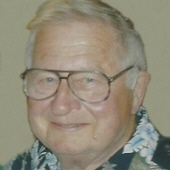 Age 87, of Weyauwega, passed away on Monday, October 1, 2018. He was born on October 9, 1930 in Weyauwega. Following high school, Douglas joined the U.S. Navy and proudly served his country for 20 years. After his time in the service, he worked as an officer in the California Corrections for 13 years. Douglas and Dorothy moved to Weyauwega in 1982. He was a long time member of the American Legion Post 176 of Weyauwega. He enjoyed gambling at the casino, fishing and going on cruises.

Besides his parents, he was preceded in death by a sister Jackie (Marvin) Bacon.

To order memorial trees or send flowers to the family in memory of Douglas W. Kamp, please visit our flower store.