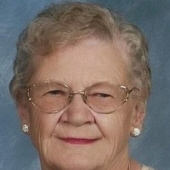 Dorothy Clara Nelson, age 92, of Waupaca, formerly of Manawa, went to her heavenly home on Saturday, July 15, 2017 at Bethany Home in Waupaca. She was born on January 1, 1925, in Bowler, Wisconsin, daughter of the late Irvin and Clara (Carlson) Peterson. Dorothy went to school in the Manawa School District. On August 14, 1946, she was united in marriage to George Nelson. Dorothy was employed at Piotter’s Store in Manawa for a number of years and also Tradewinds in Manawa. In her earlier years, she enjoyed snowmobiling and camping and fishing at their trailer in Fremont. Dorothy especially enjoyed spending time with her grandchildren and great-grandchildren. She was a member of Zion Lutheran Church in Manawa.

Besides her parents, she was preceded in death by her sister Irene (Lloyd) Schimke; brother Jim Peterson; daughters-in-law Carol Nelson and Lurana Nelson; brothers-in-law Donald Losselyoung and Harry Nelson.

To order memorial trees or send flowers to the family in memory of Dorothy Nelson, please visit our flower store.