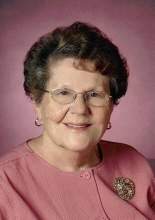 Doris Francis Crist, age 87, was called to her heavenly home on Monday, September 2, 2019. She was born on May 21, 1932 in the Town of Lind, daughter of the late Edmund and Dorothea (Zaudtke) Koplien. She was a 1950 graduate of Weyauwega High School. On May 22, 1954, she married the love of her life, William (Bill) Crist at SS. Peter & Paul Catholic Church in Weyauwega. Doris worked most of her career in the banking business, where her welcoming smile drew the longest line. What Doris loved and cherished most was the time she spent with her family.