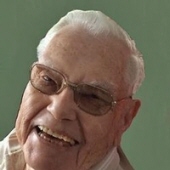 Donald Norbert Scott of Manawa passed away on April 14, 2018, at Cherry Meadows in Appleton. He was born March 30, 1925, to Frank Scott and Eva (Atwater) Scott in Black Creek. Don served in the Coast Guard during World War II in Alaska for 4 years. He worked for over 30 years at Curwood in New London. He married Rosella Beyersdorf on October 25, 1947. They had five children. He is survived by his wife, his daughters Cheryl Miller and Connie (Steve) Klemes both of Waupaca, 13 grandchildren, great-grandchildren, and other family and friends. He is preceded in death by his parents, a son Gary, and two daughters Roxie and Lori. At Don’s request, there will be no funeral service. A family gathering will be held at a later date at Big Falls Cemetery.

To order memorial trees or send flowers to the family in memory of Donald N. Scott, please visit our flower store.