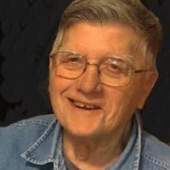 Donald “Don” Karl Wurtzel, 79, of Weyauwega, peacefully passed away to meet the Good Lord after a long battle with cancer on Friday, January 3, 2020, in Waupaca, with his family and friends by his side. Don was born in Fond du Lac, son of the late Harold and Margaret (Bieger) Wurtzel on September 21, 1940. He attended Fond du Lac High School. Don married Diane Wurtzel on December 23, 1989, in Waupaca. After high school, he worked at Giddings and Lewis in Fond du Lac and then for the Waupaca Foundry starting in 1976 until his retirement in 1995 as the Superintendent of Maintenance for Plant 3. During his time at the Foundry, he enjoyed his work and the many great employees who worked with him – Don was known for saying often...“If you give me 8, I’ll give you 8.” Don enjoyed the outdoors, hunting, fishing, traveling, activities with grandchildren, his dogs, woodworking, and spending time with family. His smile and kind heart will be greatly missed by family and friends. Don is survived by his (step) children: Theodore L. Mitchell, Waupaca; Randoph L. (Brittany) Mitchell, Waupaca; Kevin L. Mitchell, Manawa; Gerald Jeske and Pamela (Tim) Litscher, Weyauwega; his sisters: Carole (Tom) Eggers and Mary (Mike) Hammang, both from Fond du Lac; his nieces and nephews: Mark (Debbie) Eggers, Campbellsport; Kim Eggers-Stoegbauer, Fond du Lac; Kevin (Jennifer) Hammang, Oakfield; and Jessica (Jim) Allen, Fond du Lac; his many grandchildren that loved their grandpa and will miss him so much. He was preceded in death by his parents; his wife, Diane; special aunts, uncles and grandchildren. Don’s Celebration of Life service will be held 11:00 am, Tuesday, January 7, at the Cline-Hanson-Dahlke Funeral Home in Weyauwega with the Rev. Nigel Bousfield of St Mark’s Episcopal Church in Waupaca officiating. A visitation for Don will be held at the funeral home on Tuesday from 9:00 a.m. until the time of the service. A private family burial will be held Wednesday, January 8, at Estabrooks Cemetery, Fond du Lac. A special thank you to Thedacare Hospice, Alisha and Nikki, and also Synergy Home Care, Waupaca. You’re love and support was greatly appreciated.

Cline-Hanson-Dahlke -Weyauwega
To order memorial trees or send flowers to the family in memory of Donald K. Wurtzel, please visit our flower store.