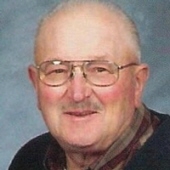 Age 77 of Manawa was called to his heavenly home on Sunday September 6, 2015. He was born at the home of his parents in rural Manawa on October 3, 1937, son of the late Henry & Viola (Hoppe) Fahser. He was baptized and confirmed at Zion Lutheran Church in Manawa. He graduated from Little Wolf High School in Manawa in 1955. On May 28, 1960 he was united in marriage to Annette Springer in Wausau. They lived in New London until 1973 when they returned to Manawa. Don worked at the Neenah Foundry for 17 years and then was a milk distributor until his retirement in 1989. Don loved to fish year round but especially during the spring walleye run. He was an avid deer hunter and loved to grow vegetables in his garden. Don was a member of St. Paul Lutheran Church in Manawa and belonged to their Men's Club and was on the church council. He is survived by his wife of 55 years, Annette. Don & Annette were blessed with three children, Deidred (Steve) Trumble, Williams Bay, Timothy Fahser, Rhinelander, Blake Fahser, Waterloo. One brother, Roger (Mary) Fahser, Manawa. One sister, Kathy (Denny) Elsner, New London. Also numerous nieces, nephews, relatives and friends. He was preceded in death by his parents, in-laws, son-in-law John O'Brien, nephew Keith Fahser. The Funeral Ceremony for Don will be held at 1:00p.m. Thursday September 10, 2015 at St. Paul Lutheran Church in Manawa with Rev. Vilas Mazemke officiating. Visitation will be at the Cline-Hanson-Dahlke Funeral Home in Manawa on Wednesday from 4:00 to 7:00p.m., and on Thursday from 11:00a.m. until the time of service at the church. Interment will be in the Little Creek Cemetery in Manawa. In lieu of flowers a memorial fund has been established for the St. Paul Lutheran School in Manawa or the charity of your choice.

To order memorial trees or send flowers to the family in memory of Donald Henry Fahser, please visit our flower store.