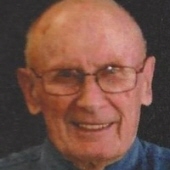 Donald E. Gensler, age 93, of Weyauwega, passed away peacefully on February 27, 2018 surrounded by his loving family. Don was born on May 23, 1924, the son of Emil and Elsie (Schoenheide) Gensler. He was baptized and confirmed at Christus Lutheran Church in Clintonville and graduated from Clintonville High school, class of 1942. Don married Albertina (Tina) Keuer on September 20, 1947 and they recently celebrated 70 years of marriage. He was a faithful member of St. John's Lutheran Church, Baldwin's Mill and served in many capacities. Don was employed at Lakeview Manor for 38 years prior to his retirement. He enjoyed hunting, fishing, camping, bowling, dancing and woodworking. He took great pride in crafting treasured wood items for family and friends. Don also volunteered with Tina at the food pantry and was a regular attendee at the local auction house.

In addition to his parents, Don was preceded in death by his brother, Roy; sister, Leone Kobs and Tina's brothers, sisters and their spouses.

The funeral service for Don will be held at 11:00 a.m. on Friday, March 2, 2018 at St. John's Lutheran Church in Baldwins Mill. Rev. Roger Nielsen will be officiating. Visitation will take place on Thursday, March 1, 2018 from 4:00-7:00 p.m. at Cline Hanson Dahlke Funeral Home in Weyauwega and again from 10:00 a.m. until the time of the service at the church on Friday. Burial will be in Oakwood Cemetery in Weyauwega.

To order memorial trees or send flowers to the family in memory of Donald E. Gensler, please visit our flower store.