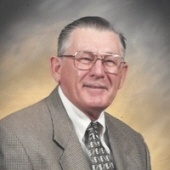 Donald A. Abraham, age 89 of Manawa, passed away from Covid-19 on Tuesday, November 3, 2020 at Manawa Community Nursing Center. Donald was born on March 2, 1931 in the town of Mukwa, Waupaca County, son of the late Henry and Anna (Schultz) Abraham. Don served in the US Army from 1949 to 1957 and worked at Voith Inc. in Appleton, retiring in 1973. He was united in marriage to Betty (Nelson) Hendricks on May 9, 1956. Don resided in the Manawa area his entire life. He graduated from Little Wolf High School in 1949. Don enjoyed camping, cars, horses and traveling. Don was a member of St. Paul Lutheran Church.

Donald was preceded in death by his parents; two brothers and four sisters.

Due to Covid-19 there will be a private family funeral for Don at Cline Hanson Dahlke Funeral Home in Weyauwega and burial will be in Oakwood Cemetery, Weyauwega.

The family wishes to thank the staff at Manawa Community Nursing Center.

In lieu of flowers, memorials can be made to St. Paul Lutheran Church in Manawa

To order memorial trees or send flowers to the family in memory of Donald A. Abraham, please visit our flower store.