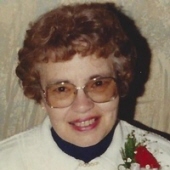 Dolores Jeanette Roloff, age 88, of the Town of Royalton, passed away peacefully at home on Sunday, March 31, 2019 after a long battle with MS. She was born on January 4, 1931 in Iola, daughter of the late Roy and Dorothy Miller. She grew up in Aniwa, where she attended grade school until her family moved to Waukesha, in 1946, the family moved to Ogdensburg and she finished her sophomore year. She then attended Little Wolf High School where she finished her junior and senior year. There she met her future husband Floyd Roloff of Royalton. They were united in marriage on January 13, 1951, at Zion Lutheran Church in Manawa when Floyd was home on furlough before leaving for Germany. Rev. Peter Buenting was the officiant. They were married for 68 years and enjoyed spending time with family and friends on their 25th, 40th, 50th, 60th and their 65 year anniversaries. Dolores worked at the New London Community Hospital after graduation from high school. In the summer of 1951, they moved to Tunnel City, a short ride from Camp McCoy. When Floyd was honorably discharged from service, they bought their first and only home in Royalton in 1953. Dolores was a den mother for the cub scouts and always had fresh baked cookies when they came to the meeting after school. When Manawa had their rodeo parades, Dolores and the boys would march in it. Floyd and Dolores enjoyed going to the Hodag Festival in Rhinelander for over 30 years. At the age of 35, Dolores was diagnosed with MS, which changed her life forever.

Besides her parents, she was preceded in death by her sister Joyce Nygaard.

The funeral service for Dolores will be held on Thursday, April 4, 2019 at 11:00 a.m. at Zion Lutheran Church in Manawa with Rev. Vilas Mazemke officiating. Burial will be in Royalton Cemetery, Town of Royalton. A visitation for Dolores will be held at the Cline-Hanson-Dahlke Funeral Home in Manawa on Wednesday from 4-7 p.m. and on Thursday at the church from 10:00 a.m. until the time of the service.