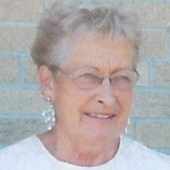 Dixie was born on January 22, 1939, in the Town of Maple Creek, the daughter of Anthony and Esther (Timmerick) Knapp. On April 25, 1959, she married Louie Klegin at St. Mary’s Catholic Church in Bear Creek. Louie preceded Dixie in death in October of 2010. Dixie had the greatest love for Arabian Horses. Those closest to Dixie knew she was very particular about her horses. She enjoyed spending time with family, friends, and her dog, Letty. Dixie also loved the hobby farm she worked with her husband along the Little Wolf River.

Dixie is preceded in death by her parents; husband Louie; and daughter, Lori.

The family would like to thank Tim Fahsar for his friendship and help shown Dixie over the years.

To order memorial trees or send flowers to the family in memory of Dixie C. Klegin, please visit our flower store.