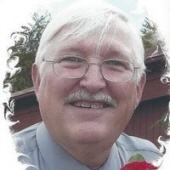 Dennis Carl Peterson, age 70, of Weyauwega, passed away on Wednesday, February 15, 2017, surrounded by his family at the Anna John Resident Centered Care Community in Onieda, WI. Dennis was born on November 2, 1946 in Waupaca to the late Kenneth and Edres (Nichols) Peterson. He graduated from Weyauwega-Fremont High School with the class of 1965. After high school, he was drafted into the US Army and served his country in Vietnam and other posts and bases located in the states from 1966-1968. When he was discharged from the military, Dennis came back to Weyauwega to work with his father in the family business, known as Kenneth C. Peterson & Son (a.k.a. Peterson Petro Products). He also helped his dad at the Gerold Opera House. On December 7, 1971, Dennis married the girl next door, Kathleen (Kathy) Patoka; they celebrated their 45th wedding anniversary together at St. Joseph's Marshfield, in chemo treatments. Around 1994, Dennis drove cab for A-1 Taxi (a.k.a. Waupaca Taxi) until May 2013. Dennis loved Fords of any style and any year! The older the BETTER! The other models were OK, but it wasn't a FORD! He was a walking encyclopedia on every little detail or part. He actually snagged his wife with one of his prize vehicles, a jeep, from the MASH era. He loved to read, go to auctions, collect coins, and was very fascinated on history. Even though Dennis was 70 at the time of his death, he felt he hadn't accomplished as much as he should of, and in reality he accomplished so much more. He was a very loving husband, helped raise three children, had the gift to gab, an ongoing memory, and always had a joke or could say something to brighten your day with a great sense of humor. His biggest accomplishment was his battle with Non-Hodgkin's Lymphoma cancer, due to Agent Orange. In October of 2012, the fight started, chemo treatments, etc., and finally went into remission. But, the fight started all over again on January 13, 2016. This time the cancer came back with a vengeance. Through all of this Dennis never gave up his courage, strength or hope! He knew tomorrow was never promised, and cancer couldn't take everything away from you. His strength was his accomplishment and his memory will always live in our hearts.

Through this journey “The Dennis Peterson Family” would like to thank everyone who has been involved in sending cards, visits, prayers, comfort and support at a time when a person can feel so helpless. It's been greatly appreciated beyond words! Thank you.

To order memorial trees or send flowers to the family in memory of Dennis Peterson, please visit our flower store.