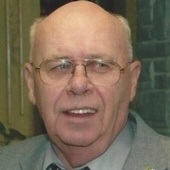 Dennis Owen Timm, age 77, of Weyauwega, passed away at the Wisconsin Veteran's Home in King, on Wednesday, September 14, 2016. He was born on November 21, 1938 in the Town of Saxeville, the son of the late Ove Timm and Nora (Yohr) Schoenick. On December 28, 1960, he was united in marriage to Romilda Frechette. Dennis served his country in the U.S. Army from 1959 to 1963. He worked many years for Skelgas in Weyauwega, and was the Mayor of Weyauwega from 1976 to 1989. Dennis was also the Sexton for Oakwood Cemetery in Weyauwega for many years. He loved spending time at the cabin, playing cards and cribbage, and especially watching his grandsons play ball. Dennis was so proud of his family, especially his grandchildren, and will be greatly missed by all.

A memorial service for Dennis will be held on Sunday, September 18, 2016 at 2:00 p.m. at the Cline-Hanson-Dahlke Funeral Home in Weyauwega with Chaplain Rich Engle officiating. Burial will be in Oakwood Cemetery, Weyauwega. A gathering of family and friends will be held at the funeral home on Sunday from noon until the time of the service.

To order memorial trees or send flowers to the family in memory of Dennis O. Timm, please visit our flower store.