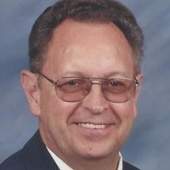 Dennis H. Rohde, age 74, of Manawa, passed away on Saturday, August 27, 2016, at Theda Care Hospital in Appleton. He was born on September 14, 1941, in Richmond, son of the late Herman and Alice (Sether) Rohde. Dennis graduated from Little Wolf High School. After getting his degree in Accounting, he worked for the Waupaca Hospital, Trade Winds in Manawa, and retired from Waupaca County. He enjoyed driving milk truck part –time, golfing, snowmobiling, and mowing his lawn. He was a member of St. Paul Lutheran Church in Manawa.

He was preceded in death by his parents and 2 brothers: Bill Rohde and Greg Rohde.

Private family services for Dennis will be held; however there will be a public visitation on Thursday, September 1, 2016 from 4-7 p.m. at the Cline-Hanson-Dahlke Funeral Home in Manawa. Burial will be in Big Falls Cemetery.

To order memorial trees or send flowers to the family in memory of Dennis H. Rohde, please visit our flower store.