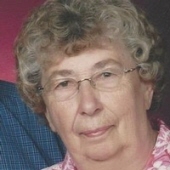 Age 84, of Weyauwega, went to her heavenly home on Saturday, November 12, 2016 at Croosroads Care Center in Weyauwega. She was born on October 10, 1932, in Ladysmith, daughter of the late Cecil and Mary (Schott) Burns. On January 3, 1953 she was united in Marriage to Roy Doede in Waupaca. Delores and Roy farmed all their life in the Town of Weyauwega until their retirement. She worked as a CNA at Bethany Home in Waupaca for 13 years. She enjoyed gardening, cooking, loved to travel, and was a member of St. Peter Ev. Lutheran Church in Weyauwega. Delores was a dedicated wife and mother.

Besides her parents, she was preceded in death by daughter Virginia, brother-in-law Donald, and her mother and father-in-law Paul and Lydia Doede.

The Christian Funeral for Delores will be held on Tuesday, November 15, 2016 at 11:30 a.m. at St. Peter Ev. Lutheran Church in Weyauwega with Rev. Newlin Schafer and Rev. Dennis Lemke officiating. Burial will be in Oakwood Cemetery in Weyauwega. A visitation for Delores will be held at the church on Tuesday from 10:30 a.m. until the time of the service.

To order memorial trees or send flowers to the family in memory of Delores D. Doede, please visit our flower store.