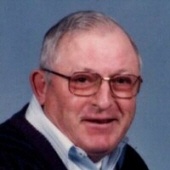 On August 7, 2021 David Yonke, beloved husband, father, grandfather, great-grandfather, uncle, brother and friend, was welcomed into Jesus' arms at Theda Care in Appleton, Wisconsin, with his wife and family by his side. Dave was born in Portage County on May 12, 1936 to the late Emil and Alice (Holman) Yonke. He was confirmed and graduated from St. Peter Lutheran Grade School and church in Weyauwega where he was a faithful member. He graduated from Weyauwega High School in 1954. Throughout his life Dave worked at different jobs. He set pins and was a bar tender at Radtke's bowling alley, farmed with his family, worked as a school janitor, and was employed for a brief time at the Wolf River Sausage Co. Dave's love and passion was for farming which he retired from.

In Dave's younger and healthier years he enjoyed playing baseball, bowling and doing some hunting.

Dave married Beverly Strehlow in Auroraville, WI on June 13, 1959. Dave and Bev enjoyed a very full and blessed 62 years together. They both enjoyed and participated in all things "fair" during Dave's many years on the Waupaca County Fair board. Watching their family grow and visiting with his children and their families brought Dave great joy.

Despite Dave's many years of struggling with illnesses from complications with diabetes he never lost his sense of humor. Everyone who knew, cared for him and loved him best expected an "eye rolling" and usually " off-colored" comment or two in conversations with him.

In addition to his parents, Dave was preceded in death by his in-laws Harold and Augusta Strehlow; sisters and brothers-in-laws Yvonne and Ken Soerens and Verlaine and Everett Fuhs, brother-in-laws Walt Pollex, Roger Krueger and Norman Strehlow; nephews: Daniel Fuhs, and Marc Soerens, his son Bryan, and great-granddaughter Claire Allenstein.

The Christian Funeral Service for Dave will be held on Saturday, August 14, 2021 at St. Peter's Lutheran Church, 312 W. Main Street in Weyauwega, at 11:00 am with Rev. Aaron Kristopeit officiating. A visitation will be held from 9:00-10:45 am before the service at the church. Burial will be at Oakwood Cemetery in Weyauwega.

The Yonke family would like to thank the wonderfully loving and caring staffs at the Fresenius dialysis center, Park Vista, Crossroads Care, and Bethany Home all of Waupaca who made Dave's recent years more comfortable and possible. Also, thank you to all the compassionate care and services given to Dave and his family by the doctors and nurses at Theda Care in Waupaca and Appleton.