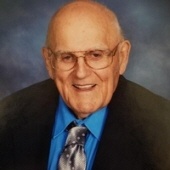 Daral L. Steiger was called home to his heavenly Father on Tuesday, March 26, 2019. He was born on April 18, 1934, in the Town of Fremont, son of the late Alpheus G. Steiger and LaVera (Lovejoy) Steiger. He graduated from Weyauwega-Fremont High School in 1952. On June 4th, 1955, he was united in marriage to Sharon L. Reinhardt. Daral proudly served his country in the United States Army. He worked as a farmer and retired from Hillshire Farm in New London. Daral enjoyed spending time with his family and friends, his many camping adventures over the years, going to tractor pulls, painting by numbers and doing puzzles. He was a member of Hope United Church of Christ in Fremont.

Besides his parents, Daral was preceded in death by one great-grandson (The Mighty) Micah Witalison, his brother Alan Steiger, four brothers-in-law, one sister-in-law, and his in-laws.

A memorial service that will celebrate Daral’s life will be held at Hope United Church of Christ in Fremont (8950 Alpine Road) on Tuesday, April 2, at 11:00am with Rev. Jeannie Douglas officiating. A gathering of family and friends will be held at the church on Tuesday from 9:00am until the time of the service. In lieu of flowers, a memorial fund has been established.

The family would like to extend their gratitude and sincere thanks to the staff at Theda Care Home Hospice for their wonderful care and concern of Daral.

Hope United Church of Christ
To order memorial trees or send flowers to the family in memory of Daral L. Steiger, please visit our flower store.