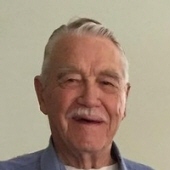 Dale Eugene Rogers, age 86, of Fremont, went to his heavenly home on Saturday, June 10, 2017. He was born on May 24, 1931 in Mauston, WI, son of the late John and Irene (Bollow) Rogers. On November 2, 1957, he married Sandra O'Connor at First Presbyterian Church in Racine. She preceded him in death in 2006. Dale and Sandra lived in Racine until he retired from Dean's Foods and moved to Weyauwega, WI in 1991. Dale was an active member of First Presbyterian Church in Weyauwega. He enjoyed sports, especially bowling, reading and singing in the church choir.

Besides his parents and his wife Sandra of 48 years, he was preceded in death by 2 great-grandchildren, Kaleb and Brynleigh; son-in-law, Robert Baker; brothers, Gaylord and John Jr. and sister, Ruth Churchija.

A memorial service for Dale will be held on Monday, June 19, 2017 at 11:00 a.m. at First Presbyterian Church in Weyauwega (200 Pine St.) with Rev. Dan McCurdy officiating. Burial will be in Hatten Cemetery in the Town of Lind. A gathering of family and friends will take place at the church on Monday from 9:30 a.m. until the time of the service.

To order memorial trees or send flowers to the family in memory of Dale E. Rogers, please visit our flower store.