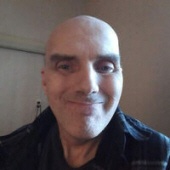 Charles M. Dinger, 56 of Oshkosh, passed away peacefully on Saturday, December 19, 2020, surrounded by his family, after a long battle with leukemia. He was born in Oshkosh on July 12, 1964, son of the late Edgar and Leona (Schubring) Dinger. He attended Oshkosh West High School.

Charles was a noticeably quiet man that loved to DJ and do crafts. He loved and cared for all of his nieces, nephews and his friends.

He is survived by his siblings: Stanley (Mary) Dinger, Raymond (Mary) Dinger, Carla (Doug) Bethke; and lastly his younger sister Barbara (Jason) Kamine, whom he had a very special bond with. He is further survived by his nieces: Rachal, who was like a best friend, (Jacob) Kamine, Ashley Kinderman and Jessica Goeden; nephews: Zachary (Carly) Kinderman, Derrick Kinderman, Hunter Kinderman, Jesse Kamine, Brandon Kamine, also his buddy Colton Kamine and many cousins.

Besides his parents, Charles was preceded in death by his grandparents.

Charles will be cremated and a celebration of life will be held in 2021.

A special thank you to Richard with Ascension Hospice for his care and concern of Charles.

To order memorial trees or send flowers to the family in memory of Charles M. Dinger, please visit our flower store.