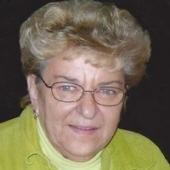 Age 77, of Manawa, passed away on Monday evening May, 9, 2016, at Iola Living Assistance, surrounded by family and friends. Carolyn was born on April 16, 1939, daughter of late Ervin and Sadie (Fahser) Schoen, in the Town of Union. Carolyn graduated in 1957 from Little Wolf High School in Manawa. She was united in marriage to Junior A. Rineck on August 8, 1959. They owned a family farm in Symco until 1990. Carolyn enjoyed snowmobiling, camping, fishing and traveling with her family. She even went to Canada a few times to fish. Carolyn and her sister Eloyious shared the love of cooking and baking. Some of their recipes were published in the Country Wives Homemakers Cookbook from the 1970’s. She was a First Responder in Symco. Carolyn later served on the Manawa Ambulance as an EMT in the late 1980’s. Carolyn loved the Packers and enjoyed watching them play. Through her adult life, she sold insurance, owned/managed the rodeo store in Manawa, and worked for Ort Trucking in New London, until she retired in 2006. She loved playing cards with her girlfriends, Donna, Kathy and Jan. Carolyn enjoyed traveling with her family and friends, whether it be to Maryland, Florida, South Dakota or Alaska, she would go! In later years, she enjoyed playing cards at Bean City, going to the casino, doing crafts, crocheting and playing Rumikub especially with her grandchildren (Felicia, Bobbijo and Hunter). She won most of the time!

Carolyn was preceded in death by her parents.

A celebration of Carolyn’s life will take place at her son, Jeff Rineck’s home (808 Water St., Ogdensburg), from 1-5 p.m. on Saturday, May 21, 2016; Pastor Vilas Mazemke will have a prayer service. Family and friends are welcome to come and pay their respects and share a story about Carolyn.

In lieu of flowers, memorial can be directed to the family.

The family would like to extend a special thank you to CAP Services, Appleton Medical Center‐ICU, and Iola Living Assistance; especially Jon Kortesmaki and Cathy Dain. Through Carolyn’s life she was a daughter, sister, wife, mother, grandmother, great grandmother, a friend and much more. She was a strong, independent and an amazing woman. Carolyn will be missed by many.

To order memorial trees or send flowers to the family in memory of Carolyn I. Rineck, please visit our flower store.