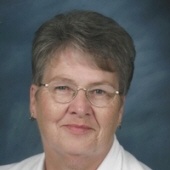 Carol Mae Tessen, age 73, of Waupaca, went to her heavenly home on Friday, February 1, 2019 at Theda Care Hospital in Appleton. She was born on December 24, 1945 in Kaukauna, daughter of the late Robert and Mildred (Martzhal) Fink. On May 15, 1965, she was united in marriage to Lester Tessen. He preceded her in death on July 8, 2009. Carol enjoyed singing in the church choir, her cancer support group, bingo, dancing (especially with her favorite dance partner Lester), and especially spending time with her grandchildren and great-grandchildren. She was a member of St. Peter Ev. Lutheran Church in Weyauwega.

Besides her parents and husband, she was preceded in death by a daughter Melissa Tessen, some siblings, and family and friends all of whom were very dear to her.

The Christian Funeral for Carol will be held on Wednesday, February 6, 2019 at 11:30 a.m. at St. Peter Ev. Lutheran Church with Rev. Aaron Kristopeit officiating. Burial will be in Oakwood Cemetery, Weyauwega. A visitation for Carol will be held at the Cline-Hanson-Dahlke Life Celebration Center of Weyauwega on Tuesday from 4-7 p.m. and on Wednesday at the church from 10:00 a.m. until the time of the service. In lieu of flowers, memorials to the family would be preferred.