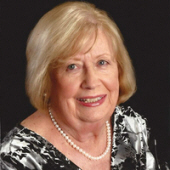 Carol attended Dover Grade School and graduated from Bay View High School where she received the Bronze Medal and was a member of National Honor Society. She received a B.S. degree in Education from UW-Madison. She was a member and chapter president of Alpha Gamma Delta and a member of Phi Beta Kappa. Twenty years later, Carol received her Master of Arts in Library Science from UW-Oshkosh. She also did post-graduate work at UW-Madison and UW-Stevens Point.

Carol enjoyed 23 years as a school librarian and district media director in the School Districts of New London and Manawa. During her 19 years at New London, she authored several grants that established elementary libraries in New London. She started her career as an English teacher and librarian at Port Washington High School, where she met her husband, Russ. They moved to Rhinelander to teach and live on Crescent Lake. Carol was a high school librarian at Minocqua and Fredonia and head librarian at Vernon County Teachers College. Upon moving to Manawa, Carol became a news correspondent for the Post-Crescent.

She also served 10 years as a board member of Outagamie Waupaca Library System (OWLS) holding the office as president for a year during that time. Carol was named to the United States National Commission on Libraries and Information Science in 2004 and served as a Councilor-at-Large with the American Library Association 1998-2001.

Carol was an enthusiastic Republican and a member of the Waupaca County GOP for 40 years. She received the 2000 6th Congressional District Alvan E. Bovay Award. She was an active member, including being chair of the annual Lincoln Day dinner, editor of the party’s newsletter, party chair from 1995 to 1997, vice-chair from 1990 to 1994 as well as leading Jean Hundertmark’s campaign in 1998 and the Waupaca County campaign for George W. Bush in 2000. She was known as ‘Marian the Librarian’ in Madison due to her regular trips there to advocate for education and libraries.

She was involved in her community, having served as a trustee on the Sturm Memorial Library Board, a member of the School Board for the Manawa School District and participated in the Manawa Women’s Club and Futurae. Carol also served on the Board of Directors for Lake Forest Resort & Club, the NEWIST Advisory Board, the New London Business-Industry-School Council and Fox Valley Symphony Board.

Carol was a member of First English Lutheran Church in Appleton and an associate member of Zion Lutheran Church in Manawa. While Carol and Russ resided in Naples, FL during the winter, they attended Shepherd of the Glades Lutheran Church. Carol enjoyed her time in Naples as well as in Cancun and Eagle River, WI where they owned timeshare properties. They enjoyed having their family visit, especially their grandchildren. Carol’s goal in life was to see her grandchildren reach each milestone of their lives.

Carol is survived by their two children - Holly Nelson (Richard) of Winneconne and son Jeffrey Diehl (Traci) of Greenville and four grandchildren Adam Nelson (Jen), Erin Holmes (Ben), Ethan and Corey Diehl. Her love of books, celebrating birthdays and holidays, written advice and special foods were gifts she gave to her beloved grandchildren. She was preceded in death by her loving husband, Russell. She enjoyed renewing her marriage vows when she and Russ celebrated their 50th wedding anniversary on August 8, 2003.

A memorial service will be held Saturday, August 29 at 10:30 a.m. at Zion Lutheran Church in Manawa, WI. The family requests masks be worn inside and social distancing will be practiced. Visitation will be held an hour before the service as well as on Friday, August 28, from 6 p.m. to 8 p.m. at First English Lutheran Church, 326 E. North Street, Appleton, WI. Masks are required inside First English during the evening visitation. A private burial service will follow the service on Saturday at Little Wolf Cemetery.

Memorials may be made to First English Lutheran Church or Zion Lutheran Church. You can send online condolences to clinehansonfuneralhome.com. Thank you to the many people who have already sent memorials and cards.

The family wishes to express thanks to Pastor Mike Dismer, Pastor Jeff Tengesdal and Pastor Mary Bauer and all her friends who offered support and comfort during her life. A recording of the service will be available on her obituary page shortly following the service.