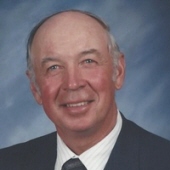 Calvin O. Nehring, age 84, of Weyauwega, went to his heavenly home on Sunday, October 6, 2019. He was born in the Town of Saxeville, Waushara County, son of Reinhold and Esther (Yohr) Nehring. He was baptized and confirmed at Christ Lutheran Church in West Bloomfield. Calvin graduated from Weyauwega High School in 1953. After high school he joined the U.S. Marines Corps Air Wing in January 1954. He was honorably discharged in January of 1956. He also was in the reserves for six years. On September 28, 1957, he was united in marriage to Betty Bachmann at St. Peter Ev. Lutheran Church in Weyauwega. He worked at Foremost Dairies following his time in the service until August of 1965 when he went into farming. Calvin served on several boards at church and was on the Weyauwega-Fremont School Board. For 25 years, he was a volunteer fireman in the Town of Lind. He was a member of St. Peter Ev. Lutheran Church in Weyauwega.

He was preceded in death by his father Reinhold, and a brother-in-law Jerome Zabel.