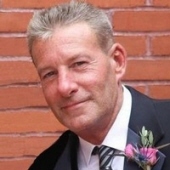 Brad Gary Kaminske, age 50, of Weyauwega, passed away unexpectedly as a result of an auto accident on Tuesday, November 21, 2017. Brad was born on December 24, 1966 to Gary and Eva (Colson) Kaminske in Waupaca. He graduated from Weyauwega High School in 1985. Brad was united in marriage to Janet Wohlrabe on May 20, 1995 in Las Vegas, NV. He was currently employed by CR Meyer in Oshkosh. Brad loved watching baseball, especially the Brewers, working on cars and spending time with his family and grandchildren.

Brad was preceded in death by his mother, Eva and brother-in-law, Gerald Wohlrabe.

The funeral for Brad will be held at 11:30 a.m. on Monday, November 27, 2017 at St. Peter Lutheran Church in Weyauwega. Rev. Dennis Lemke will be officiating. Visitation will take place on Sunday, November 26, 2017 from 12-4 p.m. at Cline Hanson Dahlke Funeral Home in Weyauwega and also from 10:00 a.m. until the time of the service on Monday at the church. Burial will be in Oakwood Cemetery in Weyauwega.

To order memorial trees or send flowers to the family in memory of Brad G. Kaminske, please visit our flower store.