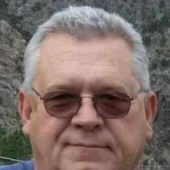 Brad Dennis Schwirtz, age 62 of Weyauwega, passed away on Tuesday, January 2, 2018 at ThedaCare Regional Medical Center in Appleton as a result of a short-term illness. Brad was born on March 17, 1955 in New London to the late Earnway and Elizabeth (Anderson) Schwirtz. Brad was united in marriage on September 23 1978 to Jennifer Mallo. He and Jennifer divorced after 33 years of marriage. Brad was then united in marriage to Jennifer Grimm on August 16, 2014. He had a lengthy career in the printing ink industry. He enjoyed various outdoor activities like camping, cutting firewood, working with his tractor, and just enjoying nature. He also really loved spending time with family boating, traveling, and cooking large meals to share.

The family would like to send special appreciation to Crossroads Care Center of Weyauwega, Park Vista Senior Living of Waupaca, and ThedaCare Health Systems for the exceptional care of Brad during his illness.

The funeral service for Brad will be held at 11:00 a.m. at Trinity Lutheran Church in Waupaca on Friday, January 5, 2018. Rev. Bryan Robertson will be officiating. Visitation will be held at the Cline-Hanson Dahlke Funeral Home in Weyauwega on Thursday January 4th from 4:00 p.m. to 7:00 p.m. and also at the church Friday from 10:00 a.m. until the time of the service.

In lieu of flowers, a memorial fund has been established in memory of Brad.

To order memorial trees or send flowers to the family in memory of Brad D. Schwirtz, please visit our flower store.