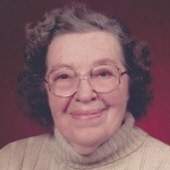 Beulah “Bea” Suehs, age 93, Manawa, went to her heavenly home on Tuesday, August 9, 2016. She was born on March 26, 1923, daughter of the late Benjamin and Martha (Virchow) Towne in the Town of Belmont in Portage County. Bea attended the Dopp School. After her parents passed away, she went to live with her uncle and aunt Ludwig (Ludy) and Julia (Judy) Virchow of Waupaca. She was confirmed at Immanuel Lutheran Church in Waupaca. Bea attended Waupaca High School and graduated in 1941. She received degrees from Oshkosh Normal School and MacMurray College. She taught at the Minnesota Schools for the Deaf at Faribault and Minneapolis. Later she taught at the Wisconsin School for the Deaf in Delavan. On December 26, 1956, she married Leonard Suehs of Manawa and joined him on their farm east of Manawa. Bea taught Sunday school for many years at St. Paul Lutheran Church. In 1988, they “retired” and moved to the city of Manawa. After Len passed in 2011, she lived at Aster Community in Clintonville for several years. She was a member of St. Paul Lutheran Church in Manawa.

She was preceded in death by her parents and husband.

The funeral service for Bea will be held on Saturday, August 13, 2016 at 11:00 a.m. at St. Paul Lutheran Church in Manawa with Rev. Nathan Reichle and Rev. Vilas Mazemke officiating. Burial will be in Floral Hill Cemetery, New London. A visitation for Bea will be held on Friday, August 12, 2016 from 4-7 p.m. at the Cline-Hanson-Dahlke Funeral Home in Manawa and on Saturday at the church from 10:00 a.m. until the time of the service.

The family wishes to extend their thanks to Aster Community, Manawa Community Nursing Center, and Southern Care Hospice Services for their wonderful care and concern for Bea.

To order memorial trees or send flowers to the family in memory of Beulah 'Bea' Suehs, please visit our flower store.