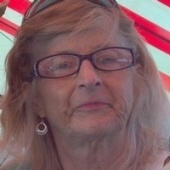 Betty Ann Planz, age 70, passed away on Friday, October 28th, 2016, at her residence. She was born on April 21, 1946, in Waukesha County, daughter of the late Albert and Evelyn (Frihart) Peters. She married Donald Planz on Aug. 9, 1991 in Iola. Betty was a member of Ss. Peter and Paul Catholic Church in Weyauwega. She was member of the St. Anne's Society and 4-H. She was a certified beautician for many years and a stay at home mom. Later in life she was her husband Don's right hand gal working all over the United States. She loved to travel. Betty loved her family, friends, and had a passion for helping. She thought of others before herself and always was thankful. She was involved in many charitable church functions. Growing up, Betty loved horse back riding, barrel racing and getting into trouble with her brothers in the hay loft.

Besides her parents, she was preceded in death by a step son Donald Planz Jr.

The Funeral Mass for Betty will be held on Tuesday, November 1, 2016 at 11:00 a.m. at Ss. Peter & Paul Catholic Church in Weyauwega with Fr. Xavier Santiago officiating. Burial will be in Baldwin’s Mill Cemetery in the Town of Royalton. A visitation for Betty will be held at the church on Tuesday from 9:00 a.m. until the time of the mass. In lieu of flowers, a memorial fund has been established for the Betty Planz family.

To order memorial trees or send flowers to the family in memory of Betty Ann Planz, please visit our flower store.