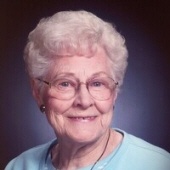 BEATA'S CHRISTIAN FUNERAL FROM OCTOBER 20,2020 IS ON VIDEO ABOVE

On Monday, October 12, 2020, in the early evening hours at Crossroads Care Center, Weyauwega, Beata L. Peterson, 99, Weyauwega, WI was lifted up by the angels to her Home on High in the Mansions of the Lord. Beata was born on July 19, 1921, to Otto and Lydia (Bremel) Gonitzke at Luther Hospital in Eau Claire, WI.

The following narrative is from a life history account written by Beata in the 1990’s,

and compiled into a book by her daughter Jeanne:

----I was baptized at St. John Lutheran, Fall Creek, where my mother was one of the organists. One of my early memories was of sitting near the organ while my mother played and my dad pumped the bellows for the pipes. There was no electricity in the church in those days.

----My first home was in Brackett, WI, about 12 miles south of Eau Claire, in a house that was built by my dad, who was a carpenter. I started school in a little one-room schoolhouse. It was just one house away from ours. But our dad got us a pony and cart and sleigh to take to church for Saturday school; kind of like Sunday school. My Aunt Dora and Uncle Gerry Hoehn lived on a farm a short way down the road from our house. My mother and Aunt Dora were very close, and their daughter Marion and I became best friends, just like sisters. The early years living near my cousins and playing with them every day were very happy.

----However, when I was about eight or nine, our country suffered in the Great Depression. Since people did not have much money, they weren’t hiring carpenters and my dad did not have much work. We had to sell our home in Brackett and move to a farm near there. It was a hard time for my folks, but we were fortunate to have plenty to eat. We had cows for beef, pigs for pork and ham, chickens for eggs and meat, and a large garden. We also had apple trees and bee hives.

----When I was about fourteen, my folks sold the farm and moved to Foster, which had a general store, a small grocery, a creamy, a tavern, and a garage and filling station. I was confirmed on Sunday, May 26, 1935, at St. John Lutheran, Fall Creek, WI. I did not have the chance to go to high school, since it was quite far away in Fall Creek. There were no school buses in those years. I did work as a babysitter and helped my mom with housework. When Aunt Dora’s son Charles was about four, she had twin boys. I was happy to go live with her and help out with the babies. I stayed there about two years and was very happy to have it become my second home.

----For a while when I was about seventeen, I worked as a waitress and at the creamery. It was during this time that I met Ralph Peterson, who was teaching music and commercial subjects at Fall Creek High School. I guess I made quite an impression on Ralph because about a year later, on a warm June night, he proposed. We were married on the 23rd of August, 1941.

----Although Ralph was teaching school, he really wanted to get into the accounting business. When a job opened up with the office of the lead and zinc mines in Platteville, he applied and was accepted. The business at the mines was good with all the war needs, but he decided rather than wait to be drafted into the army, he would be better off in the Navy. Ralph was posted to a naval base in Bremerton, Washington. After Ralph left for the military, his mother suggested we move to her house in Weyauwega at 112 E. High St. That’s how we came to live in the town that has been my home ever since.

It was in that house where all five children grew up. Beata was a stay-at-home mom, which was the norm in those days. She was a member of St. Peter Lutheran Church, where she sang in the choir and was an active member of the Ladies Aid for at least 50 years. In 1979 Beata became the first site manager of the new county nutrition site in Weyauwega; a position she held for over ten years. In 1981, at the age of 60, Beata received her G.E.D., very proud to finally have her high school diploma. For many years she enjoyed dartball league, and had a lot of fun playing in a group known as the “Fun-time Band.” They often entertained for the residents of the Weyauwega Health Care Center, now Crossroads.

After Ralph died in 1980, she stayed for nine years in the new trilevel house built in 1968 at 108 E. High St.; right next door to their first house on High. In 1989 she sold trilevel, and bought a small ranch house at 405 W. High St. In her book she wrote. “I’ve lived in three homes in Weyauwega, and all three have been on High Street. I guess you could a say I’ve been living the high life!”

The funeral service for Beata will be held at 11:00 am on Tuesday, October 20, 2020, at St. Peter Lutheran Church, Weyauwega, with Rev. Aaron Kristopeit officiating. Visitation will be from 10:00 am until time of service. Burial will be in Oakwood Cemetery, Weyauwega. Due to Covid-19, face masks are required and social distancing will be practiced. Please stay home if you don’t feel well.

Our mother was a kind, outgoing and unassuming Christian wife and mother, who touch many lives besides her children. Her name Beata was taken from the Beatitudes in Matthew 5:1-16. It was such an appropriate name, since she was such a blessing to all of us who call her Mother. We love you so very much, Mom, and you will be in our hearts forever.

We are so very grateful for the staff at Crossroads Care Center, Weyauwega, for their exceptional, loving care of Mom the past six years. We are also so grateful to Sue Schalkowski, who helped Mom while she was still in her house, and continued to be there for her after she moved to Crossroads.

We are especially grateful for an amazing angel named Sharla, and all of her loving care for Mom.