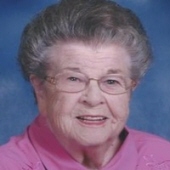 Barbara Charlotte (Brooks) Nollenberg, 89 of the Town of Union, was called home to heaven on December 14, 2017 surrounded by family and friends. She was born on May 21, 1928 in Ogdensburg, WI to the late George & Laura (Kobiske) Brooks. Barbara was united in marriage to Harvey Nollenberg on July 16, 1947. He preceded her in death in 1989. They had two sons, William and Howard. Both preceded her in death.
Barbara graduated from Manawa High School in 1945 and started working at the Bank in Manawa. After her marriage she became a partner in H. Nollenberg & Son while continuing to work outside the home. She retired from the USDA Farm Service Agency after 37 years of service.
Barbara had a great love of music. She began playing piano as a child and would take the bus from Ogdensburg to Waupaca on a weekly basis to take lessons. She was not only an accomplished pianist but also an organist, playing organ for over 60 years at St. Mark’s Lutheran Church in Symco. Not only did she play for church services, she accompanied the choir and played for weddings, funerals and esp. children’s programs. She would always get a smile on her face as she talked about the children’s Christmas program which was her favorite. She particularly liked polka music and enjoyed going to hear polka bands.
Barbara was very active in civic affairs and served for 18 years as the Town of Union Chairperson. She was Vice President of the Union Cemetery Association and a member of the Trail Blazers Snowmobile Club. She and Harvey had wonderful times snowmobiling and bowling with friends. Barbara was a lifetime member of the Union Thresherman Club. She continued to support many projects and especially looked forward to greeting people in the log cabin on the grounds. Many came in just to visit with her.
Barbara was a member of the St. Mark’s Ladies Aid and had served as President, Secretary and Treasurer over the years. She was also a member of the Lutheran Women’s Missionary League and served as Circuit President.
This “Christian Woman of Strength” will be greatly missed by family and friends that enjoyed visiting her and having wonderful conversations. She enjoyed coming to family gatherings and was always interested in what was happening in the lives of all the nephews, nieces and great nephews and nieces and great great nephews and nieces.
Barbara is survived by nephews Stanley (Janet) Leach, Oshkosh, David (Nancy) Brooks, Hurst TX, Robert (Diane) Zick, Oshkosh, James (Cindy) Zick Weyauwega and niece Patricia (James) Freer, Fremont as well as numerous great nephews and nieces, and great-great nephews and nieces, other relatives and friends. She is preceded in death by her husband Harvey, sons William and Howard, her parents, sisters Genevieve Leach and Gertrude Zick and brother George Brooks.
Thank you to friends and caregivers that have assisted Barbara and allowed her to remain in her home until very recently.
The funeral service for Barbara will be held on Monday, December 18, 2017 at 11:00 a.m. at St. Mark Lutheran Church in Symco with Rev. Jeffrey Smiles officiating. Burial will be in Union Cemetery, Symco. A visitation for Barbara will be held on Sunday, December 17, 2017 from 3-5 p.m. at the Cline-Hanson-Dahlke Funeral Home in Manawa, and on Monday at the church from 9:30 a.m. until the time of the service.

To order memorial trees or send flowers to the family in memory of Barbara C. Nollenberg, please visit our flower store.