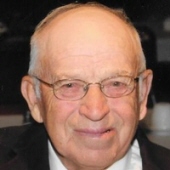 Arthur E. Pethke went to his heavenly home on Sunday, August 12, 2018. He was born on August 16, 1927 in the Town of Union, Waupaca County, son of the late William Sr. and Anne (Dallmann) Pethke. He attended the Little Mountain School on top of Pethke hill until 8th grade. He was baptized at St. Marks Church, Symco and confirmed at Zion Church in Manawa. He married Ardella Flater on June 15, 1957 at St. Pauls Church, Manawa. The couple owned a dairy and pig farm in Symco from 1950 until September 1995 when they sold the farm to their son Arthur Jr., Arthur and Ardella continued to help out well into their 80s.

Arthur was a member of St. Mark Lutheran Church, Symco. He enjoyed playing dartball with his son, son-in-law and grandchildren. He was a member of Waupaca Farm Bureau and served on the Board of Directors for over 50 years. He served as a Volunteer firefighter for the Town of Union. He enjoyed playing horseshoes and playing cards. His pride and joy was spending time with his grandchildren and great grandchildren. Arthur will be remembered for always having Ardella at his side no matter if they were in the field or out and about around town, wearing his bib overalls, wearing suspenders, driving his John Deere or Case tractors, always lending a hand to anyone in need, speaking German, and his jokes and laughter.

The funeral service to celebrate Arthur's life will be held on Thursday, August 16, 2018, at 6:00 p.m. at St. Mark Lutheran Church in Symco, with Rev. Jeffrey Smiles and Rev. Vilas Mazemke officiating. Burial will be in Union Cemetery, Symco. A visitation for Arthur will be held at the church on Thursday from 3:00pm -until 5:45pm; with the service starting at 6:00 p.m. Auf wiedersehen! (See you again).