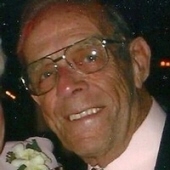 Age 93, of Weyauwega, was peacefully received into the arms of his Savior, with his family by his side at Theda Clark Medical Center in Neenah on Thursday, July 2, 2015. He was born on July 23, 1921 in the Town of Weyauwega, son of the late William and Anna (Boelter) Birkholz. Farming was a big part of his life. He also worked for Strey's Cheese Factory, and as a self taught Auto Technician for Reek Motors in Weyauwega. Armin enjoyed fixing and keeping his cars in good running order, just a favorite pastime of his aside from farming. He was a charter member of St. Peter Ev. Lutheran Church in Weyauwega. Armin married the love of his life, Dolores Jeanette Reitz on June 16, 1945 and was happy and blessed to celebrate "70" years together last month. He is survived by his wife Dolores; 3 children: Rick (Sandy) Birkholz, Jacksonville, FL; Mark Birkholz, New London; Ellen (Jon) Wendt, Sequim, WA; 4 grandchildren: Brian Birkholz, Chris Wendt, Andrew Wendt and Rachel Morris; also 5 great-grandchildren: Dawn, Emma, Leighton, Laurel and Logan. He is further survived by numerous nieces, nephews, other relatives and friends. Besides his parents, he was preceded in death by a brother Vernon Birkholz, sister Lorraine Gorges, as well as 2 nieces and 3 nephews, and 4 brothers-in-law. The Christian Funeral for Armin will be held on Monday, July 6, 2015 at 11:00 a.m. at St. Peter Ev. Lutheran Church in Weyauwega with Rev. Dennis Lemke officiating. Burial will be in Oakwood Cemetery in Weyauwega. A visitation for Armin will be held directly at the church on Monday from 9:00 am until the time of the service. In Lieu of flowers, a donation may be made to St. Peter Lutheran Church Building on the Rock Fund. A special thank you from the family to the staff at Kindred Hearts Senior Care in Greenville who assisted and cared for Armin for 2 ½ years. They would also like to thank the Theda Clark hospital staff and their hospice staff for their loving care and support in his final hours.

To order memorial trees or send flowers to the family in memory of Armin G. Birkholz, please visit our flower store.